Since political relations between Russia and the West deteriorated, the bilateral partnership between Moscow and Beijing has gained importance. At least since 2014, politicians from both countries have increasingly and resolutely proclaimed a closer alliance of the major powers. Consequently, a more comprehensive cooperation between the countries, was also claimed at the major bilateral China-Russia Conference, which took place on May 29 and 30 in Beijing. As a partner of the Russian International Affairs Council (RIAC), CREON Group supported the summit in China’s capital. Almost 300 delegates participated in the event, which was organized by the China Strategic Cooperation Council with Russia and the Institute for Russia, Eastern Europe and Central Asia. Both organizations belong to China’s Academy of Social Sciences (CASS).

The title of the top-class conference promised optimism: “China and Russia: cooperation on the way to a new era.” Dai Bingguo, a former deputy of the People’s Republic of China and co-chairman of the Chinese-Russian Committee for Friendship, Peace and Development, praised the common strategic interests of both countries. Igor Ivanov, Russia’s former foreign minister (1998-2004) and current chairman of the RIAC, was pleased with the intensification of the relationship in recent years, the importance of which should not be underestimated in an increasingly unstable world. Politically, according to the quintessential high-level discussions, China and Russia became recently closer than ever before.

And economically? There is still room for improvement, as representatives of both countries openly explained. Li Sin, senior academic researcher at the academy and Director of the Center for Russian and Central Asian Studies at the Shanghai Academy of Social Sciences, noted “an absolutely insufficient level of direct investment” from the Chinese side in Russia and vice versa. The reason for this: “There is a lack of mutual trust and understanding.”

Yevgeniy Nadorshin, Chief Economist of the investment company “FK Capital” said, he was missing “equal relations”, so he came to a similar conclusion. Chinese were wrong if they try to explain their low investments in Russia with existent investment barriers: “China has already overcome much larger investment hurdles in Africa years ago.” Instead, it should be time to admit: “We do not trust each other, that is not a question of customs barriers.” Andrey Klepach, Chief Economist and Vice-President of Vneshekonombank (VEB), found reasons for the mutually low level of foreign direct investments (FDI) also in Russia: “We must allow investments in the extraction and processing of natural resources and large-scale infrastructure projects”, the former Vice Minister of Economic Development demanded. It appears to him that China’s investment activity in Russia is too limited to the role of a creditor.

CREON had already systematically collected information about the FDI-influx for the conference one year ago: $ 62 billion, the total amount invested by Chinese financial institutions in the Russia’s energy sector. This rough figure has not changed significantly for a year. And it continues to apply that 98 percent of China’s FDI flow into the commodity and energy sectors.

China, it seems, still considers Russia as a pure raw material supplier. For Fares Kilzie, the founder of the Creon Group, this is a dangerous perception: “If the oil price moves up or down harshly, there will be conflicts between supplier and customer. Investors should swiftly diversify their economic relations with Russia.” However, this does not necessarily mean to invest in completely different industries instead: “Diversification can be achieved easily by just processing raw materials into products in Russia in order to export them to China, ” Kilzie suggested. Projects dedicated to the processing of gas to methanol or agrochemicals, for instance, would be completely free of sanctions while being economically very attractive. The Creon Group offers Chinese as well as European partners to accompany such projects as a co-investor. There are a lot of projects to be realized.

When Creon Energy Fund gets invested in a project, the Fund’s managers know how to act in the background: Many energy projects, particularly in the Oil and Gas Downstream sector have been pushed forward towards success by Creon Group’s professionals for almost two decades. Regardless Creon Energy Fund’s investments – Creon Capital’s executive team is capable to assist other investors as an advisor as we know how to mitigate investment risks in Emerging Markets in general and particularly in Russia and CIS countries.

How to protect the foreign investor’s rights and investments? This is a crucial question. And it might keep awake at night any entrepreneur when he is about to decide whether to set up a foreign Joint Venture, to purchase minority shares of a foreign company, or to found a subsidiary abroad. As a Luxembourg-based and -licensed Business Management Consultancy, Creon Capital adopted a new concept how to mitigate the risks, which has been presented during the China Roadshow 2017 to a broader audience in Beijing.

Creon Capital’s risk-minimizing approach is addressed to investors, who are keen to invest in Emerging Markets but don’t like the idea to become subject of the local legislation in the targeted countries due to their lack of stability, transparency, efficiency or predictability. Creon Capital offers to create a sub-Fund within the existing Sicav-SIF structure in Luxembourg, which is monitored by most reputable service providers such as Ernst & Young, Arendt & Medernach and the depositary bank CACEIS. The Sub-Fund, which operates independently from the Creon Energy Fund, will be subject to EU-legislation and regulation.

Structuring the investment via Luxembourg protects the investors on several levels:

Legally, the investment will be realized and monitored by a Luxembourg entity, which is the Creon Energy Sub-Fund. While being under control of the actual investor, this vehicle is subject to Luxembourg laws, regulations and standards. If a legal dispute between investors arises, the legal process will be held in EU. In fact, this reduces significantly the possibility that local businessmen threaten their foreign partners by applying non-compliant instruments.

Structurally, the Luxembourg-based Sub-Fund is being managed by the experienced Creon Capital team and its well-established service-providers. Valuables such as off-take-agreements or EPC-contracts will be held in custody by the depositary-bank CACEIS, which eliminates the risk of raids against single Joint Venture-partners. Besides CACEIS, both the auditor Ernst & Young and Luxembourg’s financial authority CSSF, are conduction a threefold monitoring and evaluation of the assets on the ground. The risk-management and compliance-policy can be subject to regular monitoring as well.

Financially, Creon Capital’s structuring services provide significant benefits. Emitted on Euro-basis, the Sub-Fund itself can be perceived as a “haven” for partners from non-European countries. The Creon Capital management can assist to fund the Sub-Fund’s project with the perfect timing for money transfers as we monitor the usually volatile currencies in the targeted countries. Together with our service partners we also help to transfer capital towards to the foreign entity and back.

Operationally, it’s up to our partners, if they prefer to run an entity on the ground themselves. Creon Capital can use the Group’s network to find the management professionals and business partners to ensure the success of the local subsidiary. Under any circumstances, the project initiator will remain to be the owner with access to revenues and profits, but also with the full economic responsibility

If you have any specific questions, don’t hesitate us:

Although relatively few Chinese companies have invested in Russia so far, the post-soviet area remains quite a promising investment destination for industry majors from Beijing and beyond. The response was remarkably strong when Luxembourg’s Fund managing company Creon Capital invited on Tuesday to Beijing’s Sofitel Wanda. Almost 100 top-managers of well-known Chinese companies such as CGGC, Wison, COOEC, CRRC, CRCC and HQC joined the event, which has been supported by Russia’s ambassador Andrey Denisov.

“Project opportunities in Russia & CIS” was the encouraging title of the half-day-event. And Dr. Fares Kilzie, Chairman of Creon Group and Creon Capital, didn’t hold back with promises: Successful and high value-adding projects are possible in CIS countries, even without access to superior political levels or the leading state-owned-enterprises such as Gazprom or Rosneft. Kilzie: “The most valuable projects in the region are medium-sized and of private ownership.” And it’s the Fund’s task to help Asian or European partners to enter these opportunities.

This should be the right time for investments in CIS countries and especially in Russia. As Ambassador Denisov underlined, political relationships between both countries have barely ever been as good as they are right now. Alexander Gabuev, a senior research fellow of the Moscow-based think tank “Carnegie Center”, added western sanctions imposed against Russia as push-factor for the bilateral economic relations: “Russia is simply forced to do more business with Asian countries, whereas investments from Europe remain stagnant.”

Yet the Chinese companies remain reluctant, when it comes to investments in Russia/CIS. Gabuev argued, Chinese companies prefer to purchase either high-technology companies in western countries, where investment conditions are more predictable. Or they go for assets in African countries, which local governments don’t claim sophisticated conditions for investors. “Russia falls in-between”, said Gabuev, “and probably the Russians are too proud to open the doors for Chinese investors.”

Meanwhile, the Chinese participants themselves named the obstacles when doing business in Eastern Europe. Ms. Yan Wang, Partner of the auditing company Ernst & Young in Beijing, mentioned the lack legal predictability and stability to explain why the Chinese are so far less committed to Eastern Europe. Mr. Xin Zongyi, Executive Vice-President of the industrial giant CGGC, drew the conclusion: “You always need a strong local adviser such as Creon Group as a partner.”

Indeed, Creon Capital is capable to reduce investment-risks associated with investments in CIS countries by structuring them through the Sicav-SIF-Fund. This applies not only for Chinese investors: European (co)-investors, partners from Japan, South Korea or Singapore are likewise interested to enter the Russian market together with Creon Capital, which facilitates a better market-access and increases the investment protection as the Fund is subject to EU-legislation and Luxembourg’s sophisticated asset-monitoring standards. 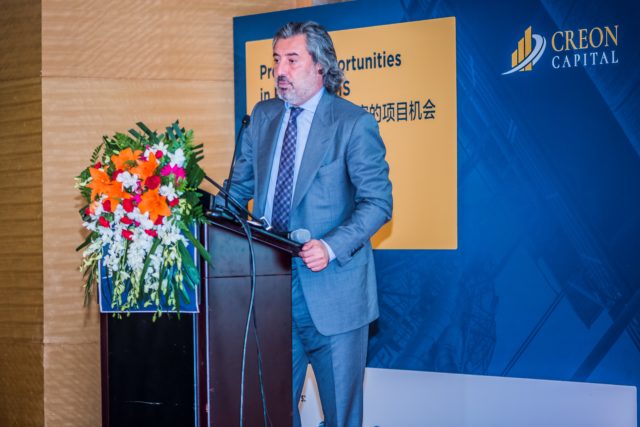