The 60 participants in the Wisdom Small and Mid-Scale LNG Conference in Amsterdam agreed on one thing: The demand for Liquefied Natural Gas (LNG) will grow enormously over the next 15-20 years. Royal Dutch Shell had concrete forecasts for this: in 2035, the world could deliver 600 million tons of transportable liquefied gas per year, more than twice as much as in 2017, according to Shell’s LNG Outlook for 2018, which was introduced by Shell’s Senior Advisor Gas Strategy Wouter Koopman.

From 2020 onwards, Shell expects a growing deficit in LNG: Although the gas market grows only one percent per year, the role of LNG as a resource for power plants or for the propulsion of ships is steadily increasing. “Gas is an easy subsitute to coal if we want to contribute to climate goals,” says Koopman. The additional volumes of liquefied petroleum gas, which manufacturers from Russia, the US and soon also from Canada on the market rinse, will not be able to keep pace with the growing demand, according to the expert.

Florian Willershausen, Director Business Development, Marketing and Communications, participated in the strategy panel for Creon Capital. He pointed out that the infrastructure was not adequate for refueling ships and trucks – and banks are still struggling to finance such projects. “We have to design this infrastructure with the help of modern instruments for project financing and involving private equity partners,” says Willershausen. The aim is to develop the entire value chain from the producer through the logistics to the end user. The Creon Energy Fund, managed by Creon Capital, is dedicated to this task. 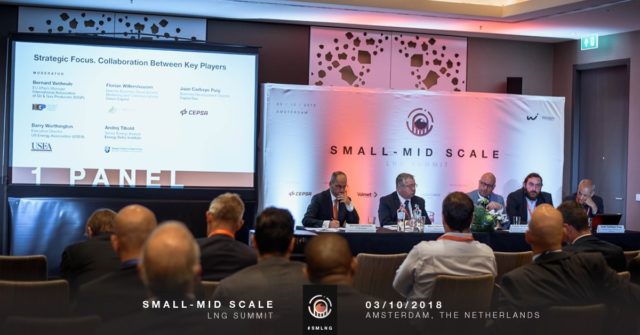 The US is likely to replace Eurasia as the world’s largest gas producer by the end of 2018. Within ten years, US companies have been able to keep developing their fracking technology. As a result, the country is not only able to meet domestic demand through domestic gas production, but also to gain a foothold in exports.

America’s LNG market was the subject of a conference organized by CREON’s partner Wisdom Events partners on 27 and 28 February in Houston, Texas. Creon Capital was on board as silver sponsor. Florian Willershausen, Director of Business Development, Marketing & Communications, discussed the LNG market and current challenges in a panel discussion with representatives from GE, Red Box, SNC Lavalin and Monkey Island LNG.

There are many challenges for the US gas market, though. It is not a coincidence, that in the past two and a half years no final investment decision has been made for the construction of new large-scale export terminals: The US manufacturers have difficulties to find customers for their hydrocarbons, given the current oversupply of gas. Since the good utilization of the terminals is crucial for banks and equity partners in the context of project financing, many projects are on hold.

Over the next few years, Australia will bring more gigantic quantities of liquefied natural gas onto the world market. At the same time, Eurasia is increasing its export of gas in the form of LNG and pipeline supplies. Nonetheless, analysts expect China’s rapidly growing demand to rapidly absorb additional available volumes.

In general, the Creon Energy Fund is also holding back on the financing of the large-scale LNG infrastructure. Instead, Creon Capital, as a fund manager, is examining entry into technology companies that make the handling and transportation of LNG more efficient. An entry into small scale LNG projects, especially in Europe, can also be an attractive topic for the Fund. The latter are aimed primarily at the supply of decentralized power plants, as well as the refueling of ships and truck fleets. These are growth markets that CREON keeps a clear eye on.

You have any questions, remarks or project ideas? Please contact us: fw@creoncapital.lu

There are some good news from Italy, most recently: The country left a deep recession crisis behind. The economy is growing again, the situation on the labor market has eased, no more banks threatened to collapse due to large non-performing loans. At the same time, the country returns to an economic growth with appears to be much more sustainable than ever before. Italy fulfilled and over-fulfilled the targets of the European Energy and Climate strategy already, reducing the level of energy consumption by 24 percent compared to the 1990’s, “Renewables” account already for 18.6 percent of the energy mix.

These “good news” are no “bad news” for the gas industry, though. Finally, Italy pushes forward reforms of the gas distribution market and the diversification of gas supplies. The regulator is keen to develop a liquid gas hub for Southern Europe, which will lead to more competition on the domestic market and increased exports soon.

Creon Capital identified five directions of investments in Italy, which could provide attractive opportunities for the Fund and its partners. This is the conclusion of a study, which was presented by the Fund’s Business Development Director Florian Willershausen in Milan during a Wisdom conference on Small Scale LNG.

Concrete investment projects are under discussion already. The presentation can be downloaded under this link. In case of questions don’t hesitate to contact us under: info@creoncapital.lu